Looking for a used car? It may cost you as much as a new one – National 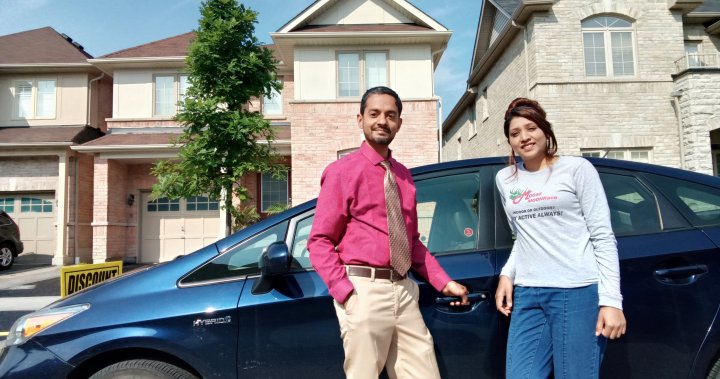 Buying a gently used car that’s just two or three years old is an age-old strategy for savvy consumers to get behind the wheel of a vehicle that feels still pretty new without the sticker shock of buying something that’s fresh off the factory assembly line. But in the upside-down reality of the COVID-19 pandemic, that’s largely no longer the case.

“We are seeing lightly used vehicles that are really being sold for almost the same as a new vehicle or in some cases a little bit more than a new vehicle, says Brian Murphy, managing director of Kelley Blue Book Data Solutions.

Used car prices in Canada, he says, are the highest they’ve ever been, at least as far back as the data goes.

Read more:
Want to buy a car? The semiconductor chip shortage could affect your selection price

Even if you’re ready to buy something a little older, you may have to cast your net wide to find what you’re looking for, he warns.

In Ajax, Ont., Mohammed Merchant had to drive 100 km to find a 2014 Toyota Prius for his wife, Salma Nadaf.

When Nadaf launched her new clothing business, the couple realized they had to upgrade from their current car, which Merchant describes as a “basic model” 2014 Chevrolet Cruze. Nadaf needed to take calls from clients while driving, the old sedan just wasn’t cutting it, Merchant says.

But Merchant says he had to scour the Greater Toronto Area to find the car he wanted.

“We were very particular about what we wanted, … which is why we did not have many options,” he says.

1:47
Why is it so hard expensive to rent a car right now?


Is it still worth it to buy used?

Skyrocketing used-car prices are primarily a by-product of a global microchip shortage that is hampering the production of new vehicles, Murphy says. With fewer cars trucks rolling off factory floors, both consumers rental companies are holding on to their vehicles for longer, which is, in turn, reducing the number of used cars available for sale, he adds.

The pullback from rental companies, in particular, has significantly dried up the supply of those coveted used vehicles that are just a couple of years old, Murphy says. Many rental operators tend to trade in their vehicles after between 12 24 months, he adds.

As demplunged during the pandemic, rental car companies across Canada sold off 30-to-40 per cent of their fleets on average, according to the Associated Canadian Car Rental Operators. But now that domestic travel has rebounded somewhat the supply of new vehicles remains tight, rental companies are scrambling to meet consumer demand.

Rental car companies hanging on to their existing vehicles sometimes buying used ones, according to Murphy.

6:10
Buying a new/used vehicle? Tips on finding the best deals on wheels

It doesn’t help that the U.S. is experiencing its own record shortage of used cars.

The volume of Canadian used vehicles sold in the U.S. usually ebbs flows with the exchange rate. Between 2007 to 2014, for example, when the Canadian dollar was trading at near or above par with the greenback, imports of used vehicles into the U.S. “fell to a trickle,” down to only 6,000 units in 2008, according to figures from DesRosiers Automotive Consultants. By 2016, though, with the loonie then considerably weaker, Canada’s used-car exports peaked at nearly 345,000 vehicles.

But despite the Canadian dollar’s strong appreciation over the past few months, U.S. demfor Canada’s second-hcars isn’t showing much sign of budging, Murphy says.

The end result for Canadian consumers is a second-hmarket in which gently used vehicles are largely defying depreciation.

Read more:
Why it’s so hard expensive to rent a car in Canada right now

New vehicles usually lose about 30 per cent of their value within the first two years or so of leaving the dealer’s lot, although the pace of depreciation slows after that, Murphy says.

But because of these shortages, “some vehicles that are very much in dem— certain SUV, sports cars trucks — they’re hardly depreciating at all.”

Car shoppers these days are often faced with the tough choice between accepting months-long waitlists for new vehicles or settling for a lightly used vehicle for roughly the same price.

“Do I order a new car wait maybe wait three or four months or do I buy a used vehicle for about the same amount? It’s got miles on. It has less warranty,” Murphy says. “That’s the sort of conundrum about buying used.”

2:34
Why more Canadians are taking life on the road during the pandemic

Why more Canadians are taking life on the road during the pandemic – Jun 14, 2021


If you’re selling, do a price check

While the supply shortage is a headache for buyers, it’s an opportunity for sellers with an extra car for which they don’t have much use, Murphy says.

You can use a website like Kelley Blue Book or Canadian Black Book to consult prices make sure you list your ride for what current buyers are willing to pay.

Merchant, for his part, is still looking for a new home for his Chevy. While he says that the car is in tip-top shape that he’s been receiving inquiries daily about it since listing in May, the car’s manual transmission has so far turned out to be a deal-breaker for interested buyers.